I was one of the founding members of Friends of Astoria Heights Park,

a neighborhood group formed in 2014 to transform our local park into a beautiful, safe, fun, and inspiring space. My primary function was to take charge of our communications initiatives — art-directing a logo, creating a website, initiating a FB group,  starting a Twitter feed, writing copy and letters, conducting surveys and outreach efforts with neighbors and local businesses, and providing photography and video, as needed.

Decades of neglect had produced a variety of problems that parents sought to address. The playground area of the park would float for hours after rainfall because of a failing drainage system. Buckling, cracked concrete made for tripping hazards throughout the space. There were neither enough trash cans nor sufficient staff to keep the park clean. Though the park was well utilized by young children,  upgrades were needed to make it more welcoming to community members of all ages.

I focused on creating materials to raise awareness of our group and its mission, to attract neighbors to join our cause and to make a positive impression on the city agencies and decision makers whose support would prove crucial.

Our group started by promoting events at the park, pot luck lunches to bring people together and start a conversation about more people becoming active members in support of group activities. Our Friends of Astoria Heights Park logo, a tree with multicolored leaves, reflected the cultural diversity of our neighborhood. Volunteers translated our posters announcing upcoming events so that we could directly entreat Arabic- and Spanish-speaking neighbors to join us. 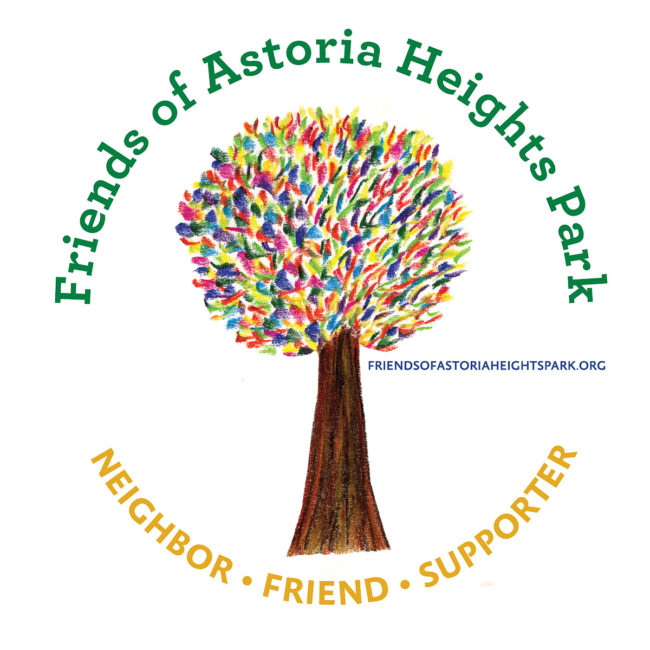 Some things have to be seen to be believed

Our group was determined to alert the Parks Department to the dilapidated condition of our park and win commitment from them to improve it.

But we had no idea what was going to come of petitioning for the city to revamp our park or of the possible timeframe involved.

So we were even more determined to follow through on our own initiatives to bring our neighborhood together to celebrate and improve our shared backyard.

A local artist and early member of our group came up with a community art idea — an enormous mural to be painted by children of all ages from our neighborhood.

She created a mock-up for the mural idea, and using photography and composition techniques, I created proofs of concept to excite the Parks Department and local politicians, without whose approval we would be unable to proceed.

This project was one of several community building exercises that elevated our group’s profile, established our group’s willingness to meet the city more than halfway to make this Park a gem.

Over the course of five action-packed years of community-building and relentless advocacy, Friends of Astoria Heights Park prevailed in several ways.

Our community truly came together, acquaintances became friends, and regular activities and opportunities to beautify and celebrate our space were increasingly well attended. The neighborhood was closer at the end than it had been at the start.

In 2017, Astoria Heights Park was one of a handful of public parks allocated funds for substantive upgrades. This was an extraordinary development.

We were even more overjoyed to learn of the city’s commitment to invest over six million dollars to revamp our Park’s drainage system and bathrooms and to implement a design featuring well-defined spaces for different age groups to enjoy. Our group ensured that all voices in our community had multiple opportunities to express their preferences and priorities directly to the designers responsible for re-envisioning our space.

Astoria Heights Park was not on anyone’s radar when this project began. Now it’s an adorable, highly used gem of a park in a New York City neighborhood that cherishes it.